One of the first home movies we have of me as a kid is me doing my own version of the Cookie Crisp commercial.  I’m sitting at the kitchen table, holding a box of the cereal, exclaiming the slogan, “If you like cookies, you’ll love Cookie Crisp!”  (I watched a lot of TV.)

Back in the late 80s and early 90s, every cereal commercial made sure to mention that it was “part of this complete breakfast.”  It then showed a quick shot of the cereal accompanied by toast, bacon, eggs, a glass of orange juice, a bowl of oatmeal, and about eight other things.  I remember wondering why my parents were under the impression that it was okay for me to be eating just cereal and why they didn’t know I was supposed to be having a lot of other things with it.  Were they just being lazy?

Cereal was not just something to eat for kids in that era.  It was a way of life.  Each cereal had its own personality, brought to life by the colorful characters that appeared on the box and in the commercials.

LUCKY CHARMS – Lucky the Leprechaun.  The kids were always after his Lucky Charms, trying to find them like treasure.  The thrill-of-the-chase theme of the commercials as the kids try to acquire the cereal was appropriate because it mirrored the quest of trying to get your parents to buy it for you.  Even in the days before nutrition information being printed on the box, getting your mom to buy you a box of marshmallows for breakfast was a hard sell.

COOKIE CRISP – Similarly, it made sense that the mascot for this cereal was a crook who was trying to steal it.  That’s basically what you had to do if you wanted to get your hands on this one.  Eating it felt like you were really getting away with something. 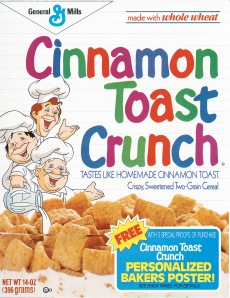 CINNAMON TOAST CRUNCH – It confused me when the Cinnamon Toast Crunch bakers went from being a trio to just being one baker, Wendell.  What happened to the other two guys?  Did they split up due to creative differences?  When the commercials with just Wendell came out I kept wondering if there would eventually be commercials with just each of the other two, like maybe they were spotlighting each one individually as a series, but that never came.  I did have a wallet with a hologram picture of all three of them.  Nowadays even Wendell does not appear on the box – it’s just a sentient piece of the cereal itself.  Apparently CTC became self-aware and no longer needed its creators. Chilling.

TRIX – I never really cared for the ad campaign of a bunch of rude kids who refused to let the Rabbit have any Trix. You have a whole box, it’s not going to hurt to let him have some.  It was just too mean-spirited.  The ads all ended with the rabbit looking depressed as the kids taunted him.  “Silly Rabbit, Trix are for kids!” Eventually they did have a promotion where you could call in and vote on whether or not you thought the rabbit should get some Trix.  I got my parents’ permission and voted for him to have some.  I guess a lot of other kids in America felt the same as me, because at the end of the promotion they did have a commercial where he finally got to try them.  But, things quickly went back to the status quo right after that and he was not able to have them in subsequent commercials.  Also, interestingly, this cereal seems to change every so often between being colored balls vs. being actually shaped like fruit. It’s like they can’t make up their mind on what this cereal even is. 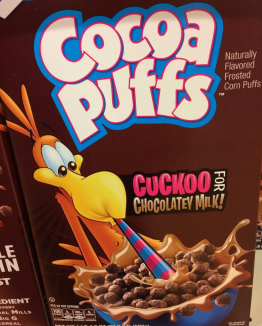 COCOA PUFFS – Sonny the Cuckoo Bird is like the opposite of the Trix Rabbit.  The Rabbit can never have Trix, and Sonny is addicted to Cocoa Puffs like they are crack.  He has a bite and loses his mind.  I also respect the fact that they recently decided that the fact that it turns the milk chocolatey should be a selling point and started marketing this right on the box.

CAP’N CRUNCH – The Cap’n was different from a lot of the other mascots in that he was benevolently giving his cereal to kids rather than them having to try to steal it from him or anything like that.  Some of his ads even had storylines that increased your investment in the product.  Who could forget when the Sogmaster locked up Cap’n Crunch in a commercial that ended with “To Be Continued,” launching the “Free The Cap’n” promotion on specially marked boxes?  A cereal commercial that ended with a cliffhanger?  I couldn’t wait for the next ad to come out to see how the Cap’n would get out of this one.

FROSTED FLAKES – Tony the Tiger always proclaimed how grrrrrreat this cereal was, usually in the context of it giving you energy for sports.  I don’t know how many athletes really fueled up with Frosted Flakes ever.  It would give you a sugar rush of energy for about 10 minutes and then make you feel sick to your stomach.  It was also one of those cereals that tended to cut up the roof of your mouth.  I don’t know if you’d want to head right out to the basketball court after eating it.  Most likely you’d be laying down with a headache and a bleeding mouth.

FRUITY PEBBLES AND COCOA PEBBLES – These cereals are the only ones I can think of that had pre-existing characters as their mascots.  How did the Flintstones get roped into being Post cereal spokesmen?  I don’t know.  It’s also interesting to think that there may be some kids today who only know the Flintstones from cereal boxes.

FROOT LOOPS – Toucan Sam was a hip, laid-back bird who encouraged you to follow his nose to some Froot Loops.  Usually he was offering that advice to someone who was down on their luck and he was suggesting they have Froot Loops as a kind of a pick-me-up.  I never cared for this cereal all that much but I respected that Toucan was a positive role model, trying to help out his fellow man by hooking them up with some of his cereal instead of keeping it from them like some of these other characters.

GOLDEN CRISP – Sugar Bear was like the Fonz of cereal mascots.  He was cool but also seemed to get into a lot of fights.  He’d say “How about a vitamin-packed punch?” and then punch someone in the face.  In retrospect it seems weird that those ads were so violent, but Sugar Bear was just so awesome you didn’t really care at the time, you just wanted to be like him.  (This cereal was easily confusable with the very similar Honey Smacks, which featured a frog mascot called Dig’em.  It seems like a missed opportunity that Dig’em never smacked someone when they asked for his cereal.)

MONSTER CEREALS – Frankenberry, Boo Berry, and of course Count Chocula combined every kid’s natural love of monsters with their equally natural love of sugary cereals with marshmallows.  Today these cereals actually go out of production for most of the year and only become available again for a couple of months around Halloween, which only increases their mythological status.

THE PRIZES INSIDE “SPECIALLY MARKED BOXES”

Every box of cereal used to come with a prize right inside the actual box.  These days most cereals have you send away for stuff in the mail, or enter a promo code online to see if you got something.  Back in the day you’d reach your grubby little hand inside, dig down deep into the cereal, and pull out a toy that was inevitably one of a series of toys that you’d be compelled to try to collect all of.  (Which, of course, meant buying more boxes.)  Sometimes through, to avoid getting a run of duplicates, you could send in some proofs-of-purchase and a few bucks for shipping and handling and have them send you the full set.  I was all about the Disney Afternoon, so my mom did this for me for the Duck Tales, Rescue Rangers, and Darkwing Duck toys that were in various Kellogg’s cereals in the 90s.

Some of my favorite “lost gems” of cereal history: 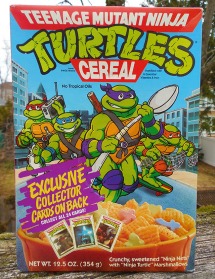 TEENAGE MUTANT NINJA TURTLE CEREAL –  When I look at a picture of the box I can still remember exactly how this stuff tasted.  It was really good.  Even though it’s been discontinued for more than two decades I’d honestly still call it one of my favorite cereals.  It was like Chex, but with more sugar, and marshmallows.  Plus, each box came with a mini-comic book inside, and there were trading cards to cut out on the back of the box.  I was obsessed with the Turtles, so anything having to with them was already a win in my book, but the fact that the cereal tasted awesome catapulted this one into legendary territory.  A few years ago I even called the Ralston company to ask them to bring this back into production.  They informed me they lost the license for Ninja Turtles a long time ago.  I suggested they could bring the cereal back and call it something else.  The person I spoke to did not seem to think that this was likely to happen but thanked me for my call. 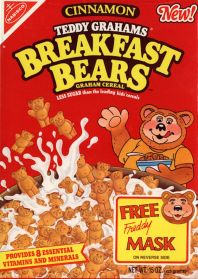 TEDDY GRAHAMS BREAKFAST BEARS – This cereal was amazing and prompted one of my favorite “comfort snacks” to this day, which is to pour milk on a bowl of Teddy Grahams and eat them like cereal.  The difference is that actual Teddy Grahams go soggy in milk in a matter of seconds.  You need to pour a very small bowl, eat it quickly, and then refill, or else you’ll be eating mush.  The cereal would go soggy too but it managed to resist the milk for a much longer period of time.  Actually the best consistency you could get with the cereal was to wait for it to go slightly soggy.  There was a brief window of time where it was just soggy enough to be a little bit soft but not too mushy.  With the cereal that window was a couple of minutes.  With actual Teddy Grahams it’s about one second.  Also the cereal box had a mask you could cut out of a bear’s face that was somewhat creepy.

NINTENDO CEREAL SYSTEM – This cereal came out right when Nintendo was starting to become popular.  It was the first cereal I’m aware of that was actually two cereals.  Each box actually had two bags of cereal inside, a Mario cereal and a Legend of Zelda cereal.  The gimmick of two cereals in one, coupled with the fact that it had to do with video games, made this one even cooler in concept than the actual product probably tasted.  I don’t remember the taste as much as I remember how exciting it was to have it.

GHOSTBUSTER CEREAL – I don’t remember this cereal very well other than we have a home video of my cousin getting a box of it for Christmas one year, and my aunt asking him if it’s one of his favorite things.

These are all of my cereal thoughts for now, but I have a feeling I’ll have more to say on this topic in the future.  What are some of your favorite cereals, past or present? Let me know in the comments!