My wife and I were at Wal-Mart shopping for school supplies for our 5-year-old son who will be starting kindergarten in the fall.  We wandered up and down the aisles, consulting the list: pencils, glue, markers, tissues, backpack… As we came to the display of backpacks, it was hard not to notice a common theme.  Batman.  Iron Man.  Spider-Man.  Captain America.  The backpacks (and in fact, lunch boxes, and much of the back-to-school apparel as well) were almost all adorned by a veritable who’s who of superheroes.

“Superheroes were never this popular when we were in school, were they?” Amanda asked.

“No,” I answered quickly and with a laugh.

Do I love that superheroes are everywhere now?  It’s not quite that simple…

When I was three years old I used to love watching The Incredible Hulk TV series with my mom.  I was obsessed with the transformation scenes, when Dr. David Banner would turn into the Hulk, or vice versa.  They were my favorite parts of every episode.

“When is he going to change, Mom?” I would ask, eagerly.

“You just have to keep watching,” Mom would patiently reply.

Children just kind of assume that their parents have some sort of innate gift of precognition. After all, their parents are always telling them “We’re leaving in 10 minutes,” “You’re going to bed in 5 minutes,” etc.  Why wouldn’t my child self assume that my mom would be able to tell me exactly when David Banner was going to Hulk Out?

Finally, the inevitable would happen. Banner would be caught by the bad guys, who would beat the crap out of him and throw him into some kind of trap.  He would get angry, the music would swell, his eyes would turn white.  His clothes would rip as his muscles grew and turned green.  With a growl and a roar he would rise up, the transformation complete!  The one, the only, the Incredible Hulk!

“Now when is he going to change back??” would of course be my immediate next question.

One day in the fall of 1986, when I was four years old, I was at Wegmans with my dad, getting some groceries.  My dad happened to park the cart for a moment next to a magazine rack.  I noticed something on that rack that looked very familiar.  Even though I couldn’t read yet, I recognized the word on the cover because it was in the same big block letters that I saw every time I watched my favorite TV show with my mom.  “HULK.”  The picture on the cover showed a man transforming into a giant gray monster.

I didn’t know it at the time, but what I was looking at was Incredible Hulk #324, the issue that brings back a gray incarnation of the character that first appeared in Incredible Hulk #1.  I begged my dad to buy it for me.  With a cover price of just 75 cents, my dad relented and bought me my very first comic book.  He would have no idea that he was spending those three quarters on something that would ultimately turn into a lifelong hobby for his son.

That night, my dad read that comic book to me as my bedtime story. The story started off with Doctor Banner captured and being held at the mysterious Gamma Base, unconscious and in some kind of restraints with lots of people watching him.  On the very next page, he transformed into the Hulk, still unconscious and restrained!  He then transformed rapidly back and forth between Banner and Hulk for several pages before busting out of his restraints.  To a kid who was obsessed with the transformation sequences, this was pure gold.

The story ended with Banner turning into a gray Hulk and then turning back to normal, feeling that he may finally be rid of the Hulk after all.  A message at the end of the comic book proclaimed: “You Won’t Believe It!  We Don’t Believe It! The NEW Hulk!”  I was hooked.

Over the following months my dad bought me the next issue, and the next, and the next.  We would read them together at bedtime, and in the long stretches as I waited for the next monthly installment to come out we would re-read the old ones.  To help fill the gap between issues my dad would sometimes buy me other, non-Hulk, comics. Some others I have vivid early memories of – “Man of Steel” #5, where Superman fights Bizarro;  “Superman” #19, where his powers are siphoned off one by one by a mysterious new villain; “Web of Spider-Man” Giant Sized Annual #3, which featured profiles of all of Spider-Man’s allies and villains.  Oh, and a special Nestle’s Quik promotional issue called “Superman meets the Quik Bunny.”  Veering further away from the superhero genre and into the realm of other soft-drink tie-ins, I also had several “Adventures of Kool-Aid Man” comics, where the big anthropomorphized pitcher of punch known as Kool-Aid Man fought Scorch, who was a being made of fire who hated how cool and refreshing Kool-Aid Man was.  But, despite how awesome that sounds, my favorite of all was still the Hulk.

Comic books are how I learned to read.  I wanted to be able to read them on my own, so I basically taught myself to read by sounding out the words and correlating them to what I already knew from hearing the story so many times.  There was one thing that made this especially difficult, however.  What I didn’t know was that my dad was paraphrasing those Hulk comics as he read them, and “toning them down” for the sake of his four-year-old audience.  Those comics were not really written for kids.  Bruce Banner is suicidal in issue #328, contemplating the idea that killing himself might be the only true “cure” to being the Hulk.  In the very first issue that I owned, #324, when Banner is caught in mid-transformation, he begs a group of SHIELD agents to kill him.  The darker themes of those issues flew right over my young head, regardless of my dad’s reworking of the dialogue or not.  I just wanted to see a guy turn into a monster and smash stuff.

The issues continued to descend into even darker fare.  Todd McFarlane, probably best known today as the creator of Spawn, took over the artistic duties on Incredible Hulk starting with issue 330.  His style lent itself to a more sinister incarnation of the Hulk, really bringing out the more monstrous aspect of the character.  Peter David, the writer, seemed to tailor his writing to match McFarlane’s style.  Issue 333 was the most disturbing yet, as it dealt with a woman who has been beaten by her husband so many times that she considers killing him.  A lot of it continued to go over my head.  The idea of a husband beating up his wife was so completely foreign to me that it didn’t even really occur to me that that was what was going on, but McFarlane’s image of a woman with a black eye and puffy lip holding a gun certainly still registered in my mind as being messed up.  My dad struggled way more than usual to come up with dialogue that made any sort of sense in a G-rated format. 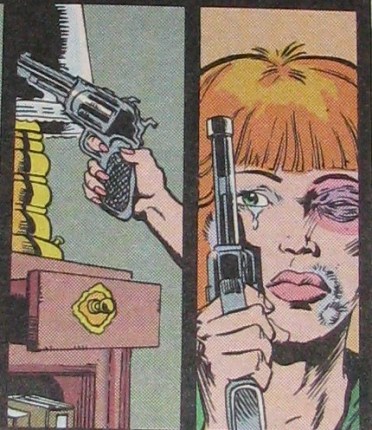 After that issue my dad told me he didn’t think he could buy me any more Hulk comics because they were getting too violent.  We skipped a few issues and he did eventually buy me #337, which gave me my first ever glimpse of the X-Men (Cyclops, Jean Grey, and Ice Man guest-star in the issue, although technically at that point they were members of a spinoff group called X-Factor rather than the true X-Men).  Appropriately, the issue ends with Gamma Base, which was the primary setting of most of the issues I owned, being blown to smithereens in a bomb blast set by SHIELD Agent Clay Quartermain.  It was the end of an era for me as well as for the comic.

I continued to cherish the issues that I had and re-read them frequently, on my own and still sometimes with dad.  I even have a few cassette tape recordings that still survive to this day of my dad reading me the old Hulk comics, because I was obsessed with recording things on my tape recorder.

But I knew my parents really objected to them now.  They reacted and spoke very differently about me continuing to read those comics (I am certain issue 333 is what pushed them over the edge) and would always refer to them as being “too violent.”  It was clear that they did not approve of my Hulk obsession anymore.

One day, in an effort to please my parents, in the ultimate act of a kid trying to do what he thought his mom and dad wanted, I threw all my Hulk comics in the trash.  That’s right, of my own free will, probably age five at this point, I gathered up every issue that I owned and discarded them.  I proudly told my parents what I had done.  I did not get the reaction I expected.  I thought they would be happy, proud, elated that I had done the right thing and disposed of those wretched, violent comics that had no doubt been corrupting me.  Instead they seemed surprised, and I could tell they felt bad that they had driven me to do that.  “Are you sure you want to do that, buddy?” they asked.  The trash had not been taken out yet and I’m sure they were wondering if they should save them in case I had a panic attack once I’d come to my senses and realized what I’d done.  But, I was adamant that I had done the right thing and confident in my very mature decision.

It would not be until much later, when I was in my teens, that I would gradually track down and purchase all of those old issues again, via back issue bins, conventions, and online orders.  (Lest you thought that my meticulous memories of each issue number and corresponding content were all from three decades ago, they are not – although a lot of it certainly stuck with me.)

Even after throwing away the old Hulk issues, I still really liked comic books.  The blend of words and pictures to create a story resonated with me, and kept me interested in reading.  I still had the Superman, Spider-Man, and Kool-Aid Man ones I mentioned earlier, and my dad continued to buy me some more lighter fare in the form of ALF, Ninja Turtles, and DuckTales comics.  I loved any Carl Barks or Don Rosa Uncle Scrooge comics, although at that point I was not really registering the names of any of the writers or artists who were creating these stories.  I remained very interested in comics but I would not say that I was actively collecting them or keeping up with what was new and coming out at any given time. 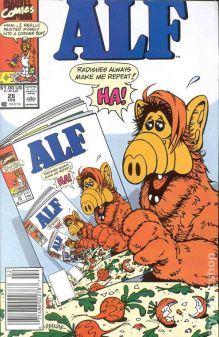 That would change in November of 1992.  I still remember being in school, in my 5th grade class, and our REACH teacher Mr. Dupra saying, “Hey, Dimino, do you know what today is?”

I thought for a minute.  I don’t know… Wednesday?  What’s he getting at?

“Today is the day Superman dies,” he replied.

November 18th, 1992 was the day that Superman #75 came out.  It was “The Death of Superman,” and everything was about to change.

View all posts by russdimino

One thought on “Why I Read Comics – Part One”