Another one of the earliest home movies that we have of me as a kid is me doing a commercial for the board game “Operation.” (I’m not sure why I felt like our home videos needed to have ads every few minutes, but, I made sure that they did. There’s even a Christmas morning video where I explain that we will be opening some more presents “after these messages.”)  If you watch the video carefully, there’s a moment where I turn over the lid of the box expecting to find all of the little bones and other assorted items that you’re supposed to remove from the guy in there, and they aren’t there.  The only thing that’s still there is the rubber band.  I play it off pretty nonchalantly and just demonstrate the game with the rubber band.  But, this reinforces one of the inherent flaws of the game Operation, which is that it comes with about a dozen tiny little pieces that are very easily lost, as demonstrated by the fact that I was doing a commercial for the game after I’d already lost 99% of the stuff that came with it.

Here are my thoughts on some of the other board games that defined my childhood.

MONOPOLY –  This is one of those games that you might think that you like, but you’re probably wrong.  If you haven’t played it in a while, you forget that it takes basically all day to play, and it’s actually not that interesting.  It’s exciting at first when there are lots of properties to buy, but then it quickly becomes about paying rent and taxes and I get enough of that in my actual life.  Also when I played it growing up everyone in my family was too nice to each other during it, and tried to help everyone out if they were about to go bankrupt by making deals with them to help them stay in the game, which meant it never ended.  There’s a game of Monopoly that we started in 1998 that is actually still going on today.  The only way for the game to go even remotely fast is to just be merciless and try to destroy everyone, and my family was just not cut-throat enough to play it that way. 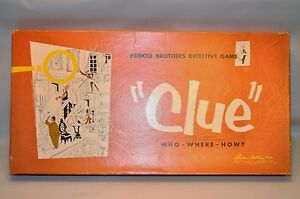 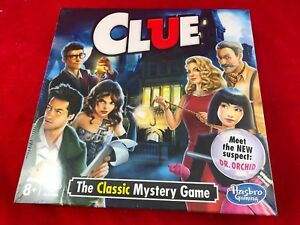 CLUE – This is my favorite board game to this day.  I grew up playing the 1956 edition which was my mom’s when she was little.  There was something so cool about how it came with the little tiny weapons that you moved from room to room as you took your guess, even if I didn’t quite fully grasp the fact that you were solving a murder when I was first playing it.  I remember one time when I was in first grade and I had my friends Michael and Robbie over (they were younger than me), and I wanted to play Clue with them and they couldn’t read yet.  I had them play against each other and I ran back and forth between them reading the cards to them and telling them what to do.  They hated it and we had a miserable time.  There have been lots of newer editions of Clue the years, including one that my kids got for Christmas last year, which for some reason ditches Mrs. White and replaces her with a new character called Dr. Orchid. The movie “Clue” is also fantastic and you should check it out if you’ve never seen it.  (I once met Christopher Lloyd at a comic convention and told him how much I loved it.  He seemed surprised, because I was probably the only person trying to talk to him about “Clue” instead of “Back To The Future.”)

MOUSE TRAP – No one ever actually played this game the way it was supposed to be played according to the directions.  Everyone just built the contraption and then set it off.  The places where it would usually mess up were that the first marble wouldn’t hit the pole hard enough to get the second marble moving, or the diver guy would not fall into the pool, or the diver guy falling into the pool wouldn’t do anything and the cage would not fall down.  We found that if you turned the guy backwards on the springboard it worked a lot better than if he was facing forwards.  I also feel like we used to fill the pool with water sometimes just for laughs but I don’t recall if that had any impact, positive or negative, on how well the trap did or didn’t work. 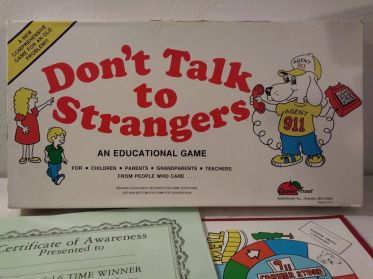 DON’T TALK TO STRANGERS – This is a game from the early 1980s that was used as a way for parents to teach their kids about stranger danger in a way that hopefully didn’t scare them too much.  There were cards with questions on them about what you would do in certain situations, like if a stranger offered you candy, or if someone you didn’t know tried to pick you up from school and stuff like that.  There were a few blank cards where you could write your own scenarios.  I came up with, “What should you do if a stranger came to your door and wanted to cook for you?”  (The answer was that you should not let them in.) 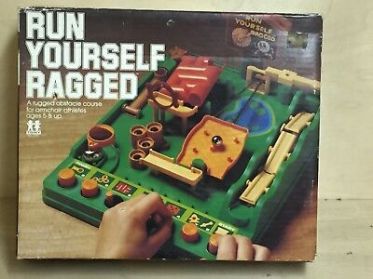 RUN YOURSELF RAGGED – You might not have heard of this game.  I don’t think it was very well known.  We found it at a garage sale one year.  You basically had to get a marble through an obstacle course that consisted of a bridge, a catapult, some little jumps and some other stuff, all by manipulating some little levers and buttons.  It was super addicting, and it was cool because you could play it by yourself, or you and your buddy could compete for who got the best time.  It was also great because you could just dive right in and start playing, there was no pretense like with Mouse Trap or something where you had to set the thing up first; they knew kids had no time for that.  When I was in third grade we had a Board Game day at school where you could bring in a favorite board game and we set up stations around the classroom where you could go around and play them.  I brought in Run Yourself Ragged, and at first people were like “What the hell is this?” but by the end of the day there was a huge crowd around that station and people were going nuts over it.

IT FROM THE PIT –  This was one of those games that looked way cooler in the commercials than it actually was.  My brother got this for Christmas one year and it didn’t work.  We exchanged it for another one which promptly broke.  I want to say we exchanged it one more time after that and that one broke as well.  Whatever motor or mechanism made the monster reach up and grab you just was not up to the task.  This game was a piece of something that rhymed with both “It” and “Pit.”

GUESS WHO – This is another one of my favorites.  It was just so simple and fun.  This is another game that has gone through a lot of different editions over the years; I don’t think any of the characters in it are the same anymore.  In college I made my own version of Guess Who by printing out pictures of all my friends, making cards of them and putting their pictures onto the board.  It was super fun to play because instead of asking questions like “Does your person wear glasses?” we could also ask stuff like “Did this person go to high school with us?” or “Is this person currently single?”

SORRY / TROUBLE – These were basically the same game, but one had cards and one had dice in a pop-o-matic bubble.  That’s it.

CANDY LAND – This one was very simple to play (you just drew cards to see what color space to go to), but the artwork on the board and the colorful characters really captured the imagination.  At least for me, as a kid, I remember wanting to know more about the characters because they seemed so interesting and cool looking.  The art style and even some of the names of the characters have changed over the years, but the one pictured here is the one I remember best.

13 DEAD END DRIVE – I really can’t comment on this one too much because I don’t remember it very well.  I think my younger siblings played it more than I did.  I am only including it here because I think it’s another one like Mouse Trap where you tended to just set all the stuff up and then set it off without necessarily playing the whole game.  It was a house with a series of traps in it where you could try to take other people out.  I think the game makers tried to combine Clue and Mouse Trap into one game, and at least by my vague recollection I think they succeeded. 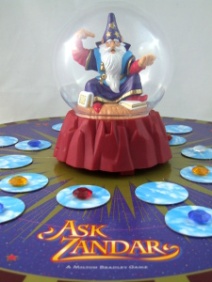 ASK ZANDAR – And this is yet another game where I don’t think people really played the actual game that much, you just took out the Zandar crystal ball or whatever and asked him stuff.  He was basically a glorified 8-Ball that talked and cost a lot more money. 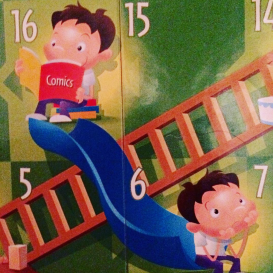 CHUTES AND LADDERS – As a kid, I didn’t really like this game.  It just seemed way too easy to get sent way the heck back to the beginning at any moment.  As an adult I don’t like it because I realized one of the things you get sent down a chute for is READING COMIC BOOKS!  Dude, screw you, Chutes and Ladders.

CROSSFIRE – This is the prime example of a game where the commercial made it look 1,000,000 times cooler than it really was.  If you grew up in the 90s, I know you remember the commercial for this game.  The kids playing it fly down on hoverboards into an arena that is on fire.  The narrator proclaims, “It’s sometime in the future. The ultimate challenge. Crossfire!” And then the kids proceed to play the game while lighting flashes in the background and the song blares: “CROSSFIRE…. You’ll get caught up in the…. CROSSFIRE…. CROSSFIRE…. CROSSFIRE!!!!” Close-ups of the kids shooting at each other, their sweaty faces, them reloading their guns.  Finally one kid wins, and the kid who loses spins around like crazy and gets blasted into the sky and out of the arena.  I don’t know who made that commercial but A.) I hope they went on to direct like a Star Wars type of movie and B.) I also hope they got sued for false advertising because in no way does this commercial set the realistic expectation for the fact that you are just trying to shoot some balls at slightly larger balls that have pieces of plastic around them into your opponent’s side of the board.

BIG JOHN – This was a game that my dad bought us, I’m sure.  It was a giant toilet, and you fill it up with “scuzzies” (because I’m sure they could not say “poop,” and also they are green because I’m sure they weren’t allowed to make them brown, but that’s what they represent).   You would load the scuzzies into the toilet, and then take turns flushing the handle.  Sometimes nothing would happen, sometimes the scuzzies would shoot out of the pipe at the bottom of the toilet at you and that meant you lost.  It was like Russian roulette but with poop.  As I am writing this I feel like I must be leaving out some aspect of the game play but I actually really think that was it.

That’s all for now, but this might be another blog topic that warrants a “Part Two” in the future, so stay tuned!

View all posts by russdimino